A PHP Error was encountered

Trauma remains the most common cause of death for all individuals between the ages of 1 to 44 years and is the third most common cause of death regardless of age 1 . All penetrating neck wounds are potentially dangerous and require emergency treatment. Penetrating neck injuries comprise of 5 to 10% of all trauma cases 2 . Multiple vital structures like airway, neck vessels, pharynx, esophagus, brachial plexus, peripheral nerves and cranial nerves are located in the neck. These being unprotected by any bone are vulnerable to trauma 1,2 . Authors report two cases of penetrating neck injury caused by metallic fragments, with a review of literature.

A 35 year old man presented to the out patient department of Pt. BDS PGIMS Rohtak with a 20 days old history of penetrating neck injury with a broken piece of axe. The patient was working with an axe when a chip broke and hit him in the middle of neck anteriorly. Patient had persistent pain in the neck and difficulty in swallowing for which he approached to the PGIMS.

On examination the patient was conscious, well oriented and cooperative, pulse was 72/min, B.P was 130/84mm of Hg. No neck swelling was seen, a small scar mark of size 1x 0.2 cm was seen midway between the thyroid notch and cricoid cartilage in midline. A contrast enhanced computer tomography (CECT) scan neck was done which revealed a metallic foreign body in zone-II located in the midline impinging the trachea. It was away from the carotid and jugular vessels.(Fig1)

Fig 1: Contrast Enhanced CT scan neck showing a metallic foreign body in zone-II located in the midline impinging the trachea but away from the carotid and jugular vessels.

The patient was taken up for surgery under local anesthesia. A horizontal incision was given in the midline in the neck crease encompassing the previous scar mark and the neck was explored. The foreign body was embedded deep in the neck tissues and was located by digital palpation. It was identified and removed, it measured 0.9x 0.5 cm.(Fig2). 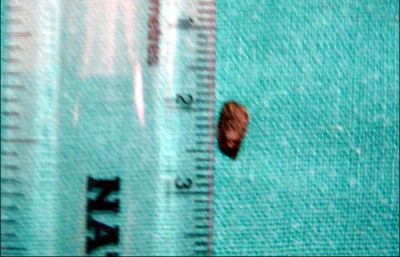 The wound was closed in layers and a light compressive bandage was given. No post operative complications were noted.

A 30 year old male presented to the causality department with less than 12 hour injury neck caused by a foreign body which broke from the saw used for cutting metals. Following the injury patient developed intense pain in the neck and associated difficulty in swallowing.

On examination the patient was conscious, well oriented and cooperative, pulse was 84/min, B.P was 130/80mm of Hg. No neck swelling was seen, a small wound of size 0.2x 0.2 cm was seen just on the right side midway between the thyroid notch and cricoid cartilage. A Contrast Enhanced Computer tomography (CT) scan neck was done which revealed a metallic foreign body in zone-II located on the right side, lying in the soft tissues superficial to thyroid cartilage in the plane between sternocleidomastoid muscle and the strap muscles. Great vessels were normal. (Fig3).

Fig 3: Contrast Enhanced CT scan neck showing a metallic foreign body in zone-II located on the right side, lying in the soft tissues superficial to thyroid cartilage in the plane between sternocleidomastoid muscle and the strap muscles

A horizontal incision was given in the midline in the neck crease encompassing the entry wound and the neck was explored. The foreign body was embedded deep in the neck tissues and was removed. It measured 1.5x 0.1 cm. (Fig4).

The wound was closed in layers and a light compressive bandage was given. No post operative complications were noted.

Anatomically the neck can be divided into three major zones. Zone-I is the area between the clavicle and the cricoid cartilage encompassing the thoracic outlet structures. The bony thorax and clavicle act to protect zone-I from injury, but this also makes surgical exploration difficult. Zone-I has a fairly high mortality rate of 12%. Zone-III is the area that lies between mandible and the base of skull. This area is also protected by skeletal structures and is difficult to explore because of skull base and the need to divide or displace the mandible. 2-5

Zone-II is the area that lies between the angle of the mandible and the cricoid cartilage. It is most frequently involved region (60-75%) in neck penetration. Zone-II contains the internal and external carotid arteries, jugular veins, pharynx, larynx, esophagus, recurrent laryngeal nerve, thyroid, para-thyroid glands and the spinal cord. 2-5

The emergent management of penetrating neck trauma begins with identification and treatment of conditions that constitute an immediate threat to life. The Advanced Trauma Life Support (ALTS) course refers to this as the primary survey or “ABC” (Airways, with cervical spine protection, Breathing and Circulation). Any life threatening problem identified in the survey must be treated before advancing to the next step. 3

A clarification and classification of the wound should be done. Under no circumstances should a penetrating neck wound be probed, because blood clot dislodgement and uncontrolled bleeding can occur. Every patient with significant neck trauma should have routine anterior and lateral neck radiographs to rule out hemathorax, pneumothorax or pneumomediastinum. Vascular injury should be carefully looked for and ruled out. The physical findings of vascular injury are pulse deficit, active bleeding, expanding hematoma, bruit, murmur, neuralgic deficit or hypotension. 6 Patients with acute injury to the spinal cord may have hypotension without tachycardia (spinal shock). 2,3 About 30% of patients with carotid artery injury have a neuralgic deficit. 7 Arterial injury or propagation of thrombus into the skull can lead to cerebral ischemia. One-third of the population cannot tolerate complete unilateral carotid occlusion. 8,9 In a study by Stone and Challahan, vascular injuries in the neck account for 50% of deaths in penetrating neck trauma. 10

The debate over the merits of mandatory versus selective exploration continues. Some authors suggest that mandatory exploration is appropriate. But among patients explored routinely 50-70% has negative exploration with some morbidity and some cosmetic deformity. 7,11

In view of difficult surgical approaches to zone-I and zone-III, most authors agree that all patients who are stable should be evaluated with angiography, with consideration of barium swallow. For zone-III injuries, frequent intra-oral examination should be performed to observe for edema or expanding hematoma within the para-pharyngeal or retro-pharyngeal space. In zone-II, isolated pharyngo-esophageal injuries are most common structures missed clinically in the pre-operative evaluation. A significant number of patients can be selectively managed. When patients are stable and lack physical signs of obvious major neck injury, they are evaluated by diagnostic radiologic and endoscopy techniques. Angiography should be done in penetrating neck injuries for evaluation of vital vessels and their relationship with the foreign body. 2,3.11

Nunez et al has emphasized the use of contrast enhanced CT angiography as a non-invasive alternative to conventional angiography. 12 In zone-II injuries findings on physical examination are good predictors of arterial injury and can exclude injury in 99% of patients. 13 Sekharan et al in a study of 145 patients of zone-II injury reported that physical signs of vascular injury like active bleeding, expanding hematoma, bruit, pulse deficit etc could accurately detect vascular injury with a missed injury rate of 0.7%, which is comparable to atreriography. 14

The risk of health care professionals of HIV seroconversion through a penetrating injury is around 0.3%. 15 In hospital pathology departments cuts or needle have been reported to occur in 1 of 53 autopsies performed by experienced pathologists and 1 of 11 autopsies performed by residents. Unfortunately, even experienced pathologists have sustained penetrating injuries during autopsy and contracted HIV infection. 16,17

Surgeons are exposed to all the above possible risk factors, further in neck while localizing the foreign body, digital manipulation sometimes supersedes direct vision and can lead to accidental penetrating injury. Occult soft tissues and organ based needle fragments present the alarming potential to cause digital injury. 18 The guidelines for digital protection during high-risk autopsy cases include wearing double latex, heavy latex, chain mail, fine mesh metallic and Keular gloves. 17 However none of these measures will protect against forceful needle punctures from retained needle fragments; therefore even greater vigilance is required in exploring neck penetrated with metallic fragments and needles.

Your free access to ISPUB is funded by the following advertisements: